Weevils are beetles belonging to the superfamily Curculionoidea, known for their elongated snouts. They are usually small, less than 6 mm (1⁄4 in) in length, and herbivorous. About 97,000 species of weevils are known. They belong to several families, with most of them in the family Curculionidae (the true weevils). Some other beetles, although not closely related, bear the name “weevil”, such as the biscuit weevil (Stegobium paniceum), which belongs to the family Ptinidae.

Many weevils are considered pests because of their ability to damage and kill crops. The grain or wheat weevil (Sitophilus granarius) damages stored grain, as does the maize weevil (Sitophilus zeamais) among others. The boll weevil (Anthonomus grandis) attacks cotton crops; it lays its eggs inside cotton bolls and the larvae eat their way out. Other weevils are used for biological control of invasive plants.

A weevil’s rostrum, or elongated snout, hosts chewing mouthparts instead of the piercing mouthparts that proboscis-possessing insects are known for. The mouthparts are often used to excavate tunnels into grains. In more derived weevils, the rostrum has a groove in which the weevil can fold the first segment of its antennae. 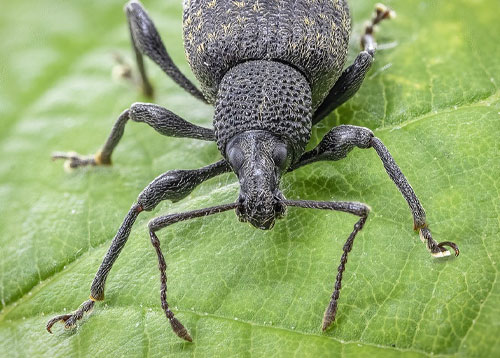 Because so many species exist in such diversity, the higher classification of weevils is in a state of flux. They are generally divided into two major divisions, the Orthoceri or primitive weevils, and the Gonatoceri or true weevils (Curculionidae). E. C. Zimmerman proposed a third division, the Heteromorphi, for several intermediate forms. Primitive weevils are distinguished by having straight antennae, while true weevils have elbowed (geniculate) antennae. The elbow occurs at the end of the scape (first antennal segment) in true weevils, and the scape is usually much longer than the other antennal segments. Some exceptions occur. Nanophyini are primitive weevils (with very long trochanters), but have long scapes and geniculate antennae. From the true weevils, Gonipterinae and Ramphus have short scapes and little or no elbow.